This week, I wanted to share a little piece of my weekend with y’all and recap my experience at DragCon!

If you are unfamiliar with the event, I’m not necessarily shocked because I really didn’t know much about it until a few months ago, but basically it is a massive convention for Drag Queens and it finally has come to the East Coast!

So of course when I saw it being advertised and talked about in beauty guru’s Youtube videos, I texted my cousin and immediately knew we had to go.. so we did!

The convention was held in my favorite city of all time, New York, at the Javit’s Center, so for me, it was super easy to get there and navigate around. I’ve been to conventions before and normally I will get to the building around 7:30am (waaaayyyy too early, I know, but some people take their conventions seriously) so this one was no exception. BUT I was shocked to see that as we were approaching the building there was literally like 20 people in sight. We were within the first 100 people to get there, which was a total surprise considering I thought there would be a line wrapped around the building. So anyways, we picked up our badges at registration and just chilled for the next two hours.

By the time the convention was about to start, people were piling in and we were moving into the show floor. So this is where getting there early definitely paid off. We went straight to the runway as that is where the opening was going to kick off and we were right in front.

The DJ played sassy songs and we bopped around a Rupaul’s DragCon beach ball until all of a sudden Michelle Visage was standing right in front of us, and then seconds later was introducing the previous, and current, crowned queens of the show. Let me just tell y’all.. I about hit the floor when Bob the Drag Queen walked out (hint: she’s my favorite)

Of course all of the other queens were totally fabulous as well and the outfits they served us all were 100% fabulous, but the opening was wrapping up and so we made our way to the Jeffree Star Cosmetics booth next!

My cousin and I both knew we wanted some stuff from the booth, but while asking around to see where the line started, we stumbled on one of my friends from high school. I had no idea they would be there so it was a pleasant surprise and a reminder that it’s such a small world. He was in the line that had formed to meet Jeffree, Manny, and Laura Lee, and said that they had already capped the line but if we wanted to meet them, we could just stay with him.

This was a total incidence of chance and luck. Although most people in the line had to wait the 4 hours until the meet and greet even started, we got the luxury of being able to walk around the show floor because his mom could hold our spots for us.

So we made our way to the cosmetics line and snagged some products at a massive discount, hallelujah! Not to mention we watched Kim Chi and Naomi Smalls strut right past us, ugh, yes please!

We got pictures around the lounge (they had an amazing red (more like pink) carpet kind of wall that was fabulous for that and we also saw so many queens around at their booths too, not to mention the crown the queens get to wear when they become the winner.. it’s huge. and wonderful. and everything you could ever imagine it to be + some. 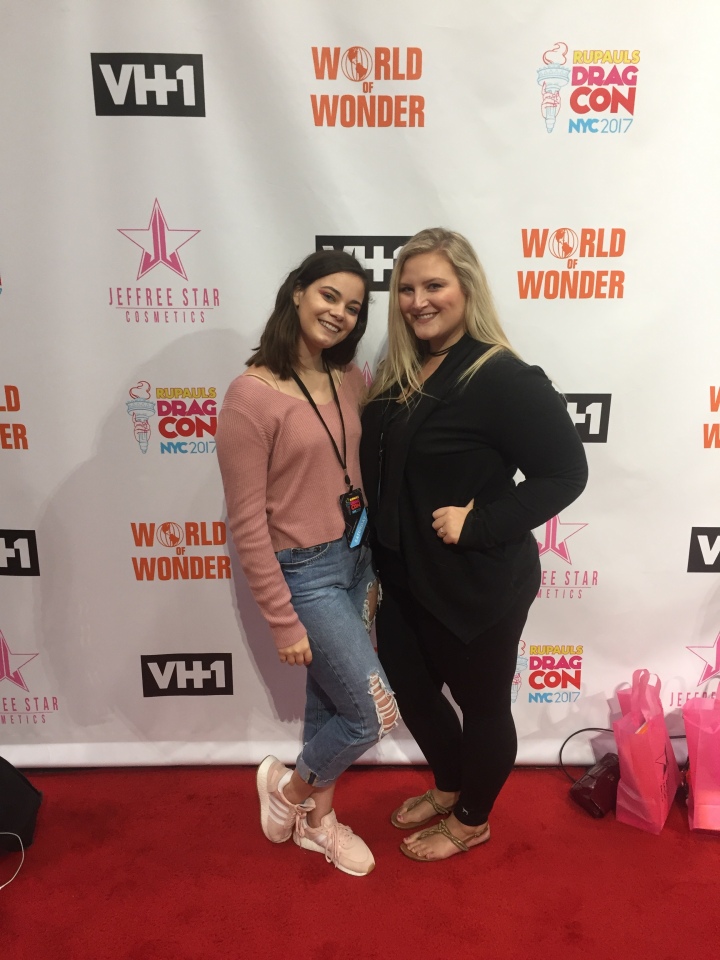 But then it was about time to get back in line and wait for the meet and greet to begin! All in all, the meet and greet took about 2-2.5 hours. Jeffree, Manny, and Laura Lee were so wonderful and really took the time to talk to every single one of us. They even stayed way beyond the time they said they would so that every one in line got the chance to see them, which I really think speaks volumes about their character.

Honestly, the whole moment was a blur and I don’t even think I said more than like 20 words to all of them but it made my heart so full to hug them, have Manny call me ‘Honey’, and tell them how amazing they all looked.

And from there we were on our way to their panel! I thought the panel they did with all three of them was so fun. They were so honest, relaxed, and funny that it was worth so much waiting. They talked a lot about what motivates and inspires them to keep going on in their careers and in a way I think it motivated and inspired me to just own it, and not give a fudge what anyone thinks.

And by the end, the day was over. It was a blur and super crazy, but 100% worth it. Now, I’m not saying the event was perfect, trust me, as a convention goer to BookCon, I think the organization of this needs a lot of work; however, considering this is the first one in NYC, it really did go smoothly and was a total hit.

Some things they need to work on are lines, lines, LINES. Everything was a waiting game. You wait for panels, you wait to meet the queens, you wait to even go to the bathroom and get food for crying out loud. I think it all could be resolved with clearer scheduling of all the guests, and spreading out the events over the whole building, rather than in just one area.

It’s disappointing to me that I didn’t get to meet any of the queens personally because I just didn’t know when their times would be, and it was also really difficult to know exactly what you wanted to do if only some of what was happening is listed on the DragCon website.

But of course, there is always next year! And it is always so wonderful to be surrounded by such a colorful, beautiful, and accepting community of people. Trust me, you will never meet people more supportive and there for you than these. It’s just amazing.

But, I hope you enjoyed this little story time and I will see you back here in a few for more, so..

Until next time.. Sissy That Walk!